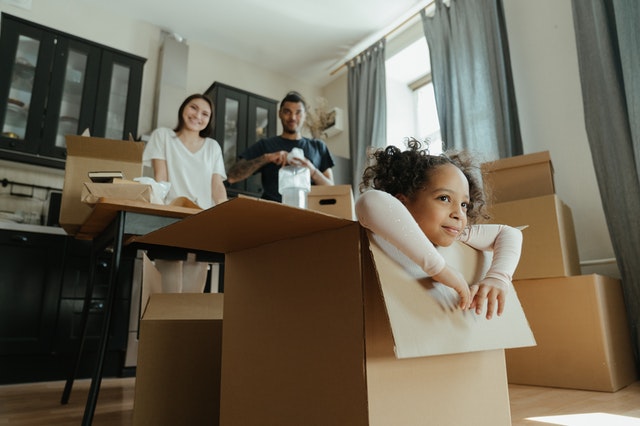 Keep in mind that whatever the reasons behind it, moving represents a major change for everyone in the family. Fatigue and uncertainty can eventually cause emotions to run high and tempers to run short. Prior preparation will help your entire family better handle the stress that moving can create.

Talking with your children about the move in advance should be a top priority. Explain to each child at his or her own level of understanding why you are moving, what the new home will be like, and how each of them can contribute to the success of the family’s relocation.

Encourage them to express whatever feelings they have on the subject. Accept their attitudes, even if they are negative, and discuss your own feelings. If you as a parent view the change as the fulfillment of some hope or ambition, the attitude you will transmit to those around you, especially your children, will be a happy one. You can meet the inconvenience of relocating with an optimistic outlook and a fresh start.

On the other hand, if the move is associated with disappointment or grief, your children may be unintentionally left to emotionally fend for themselves in a situation they may not fully understand. Acknowledge that both you and your children will probably have mixed feelings about leaving, no matter how nice your new situation may be.

Above all, be honest. Truth will go a lot further than pretense or made-up stories in preparing children for the move.

And remember that the strength of the family as a unit will contribute immeasurably to the readiness and confidence with which the children adapt to their new surroundings.

If children have moved before, the current move will recall memories of feelings they experienced then. If the feelings were unpleasant, the child may exhibit signs of depression, withdrawn behavior or tantrums as the pending moving day nears. Watch for these signs, and when dealing with them remember that the child may not fully understand the reasons for his or her behavior.

For children who have not moved before, this experience may be their first with giving up the known for the unknown. While they may seem to accept the move well, understand that their need for reassurance and security is high.

Each child, because of differences in age and experiences, will view the move differently. An infant, of course, will be least affected — as long as they are comfortable and their normal routine isn’t disrupted too much, they won’t be a concern.

But the pre-school child can pose a real problem. Their sense of identity relies on his or her parents, the family routine, and several objects that are special to them. When they see their favorite toys being packed and put away, a crib being dismantled, or mother rushing around with apparently little time to with them, they start to worry. One of your child’s greatest fears may be that they will be left behind. Make sure their special stuffed animal or favorite toy doesn’t get packed away.

The temptation may be great to send your preschooler to a babysitter during the move, but they will feel a lot better if you let them stay with you. Let them pack and bring along some of their special possessions (do not discard any of them before the move, no matter how old and tattered they are). Still, some parents find their move goes more smoothly with the children occupied elsewhere.

Grade school-age children have a more highly-developed sense of self, since their world extends beyond the family circle. Their developing sense of discovery may make the idea of moving exciting to them. While they will be leaving friends, these will not be the deep, vital friendships of older children. The expressed concerns of a grade-schooler usually deal with how well they will fit into where they are going.

One of the unfortunate myths about relocation is that school age children should not be moved until summer. Many families have undergone considerable inconvenience just to avoid a school-year move. But a summertime move may cause more problems than it solves.

Since school is a primary source for making friends, a summertime move will place your child in unfamiliar surroundings at a time when his or her chances for making friends are at a minimum. When school opens in September, they will enter the first day chaos as a stranger. The teacher, meanwhile, facing a new class, may not be able to identify their discomfort and need for special attention.

A move during the school year, on the other hand, allows your child to go directly from one social setting into another. They are new on the scene, so their classmates – and more importantly, the teacher – pay special attention to them.

Classes in the elementary grades are especially flexible enough to allow school transfers with a minimum of academic problems. High school curricula are generally more structured, which might cause some transitional academic difficulties. These issues, however, would still be a problem in September in the case of a summertime move. The uncertain academic drawbacks of relocation during the school year should be weighed against the social problems a summer move is almost certain to cause.

Adults find that moving can sometimes be an emotional and stressful experience. And it is likely to be even more so for your children, who don’t have the maturity, independence and understanding of a parent. You will move many valuable possessions when you change addresses, but none as precious as your children. Give them the attention they deserve and need.

Here are some effective tips for making the transition as smooth as possible for your children:

Adults find that moving can sometimes be an emotional and stressful experience. And it is likely to be even more so for your children, who don’t have the maturity, independence and understanding of a parent. You will move many valuable possessions when you change addresses, but none as precious as your children. Give them the attention they deserve and need.

Michael's Goals
* To have Happy Customers

* To be the Best Mover in the New York City

* To get you there Safe & Secure

* To provide you a Stress & Hassel Free move

Thinking of an Office Move? Follow These 10 Tips
20 Tips FOR Easy Moving in 2021
18 Beneficial Reasons to Hire a Professional Mover
9 Tips To Move Safely During COVID-19